Care to guess where this is heading?

We just found the body. 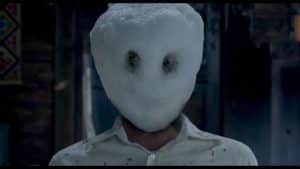 And Detective Harry Hole is sent this note, taunting him… 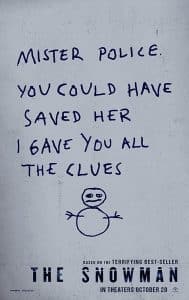 Does this sound like an experience you’d want to miss out on?

The Snowman is a 2017 psychological thriller film based on a book by celebrated Norwegian author Jo Nesbø.

It features a brilliant but alcoholic officer in the Norwegian Police Service - Harry Hole - facing off against a sadistic serial killer. 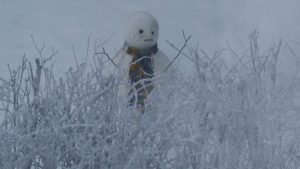 As you might have guessed, the serial killer beheads his victims, and places the head on top of a snowman.

And I don't think I'll be giving away any surprises when I reveal that the killer leaves behind no clues.

Or that he occasionally taunts Detective Hole about not being able to catch him, signing his notes with the drawing of a snowman.

What did the film have going for it?

The film had a number of factors working in its favour.

And how did it eventually do?

Well, the film was released in over 1800 theatres.

First week earnings were $3.2 million, against an expectation of $10 million.

It has a Rotten Tomatoes rating of 7% and “generally unfavourable reviews” on Metacritic.

By any measure, a staggering downfall for a film based on a bestselling book, boasting a stellar cast, and shot in stunning locales.

So, what went wrong?

What do you think?

In one word, Execution.

In an interview, director Tomas Alfredson said “when we started cutting we discovered that a lot was missing”.

Further, Alfredson claimed “...suddenly we got notice that we had the money and could start the shoot in London.”, leaving little time to prepare.

In other words, there was little time to plan the filming, and the filming itself had to be rushed at times, leading to haphazard shooting.

And the end product was a film 10% to 15% of which hadn’t even been shot, and which didn’t even seem to have a logical sequence.

For the moviegoers who flocked to its screenings, pulled by the posters, the storyline and the cast, it was a poor experience.

The importance of execution in creating a great experience

If you want to create a breathtaking experience for your audience, you MUST pay attention to execution.

If you have great content to offer your audience, but the way you offer it is flawed, or you hit snags during the presentation, your audience won’t get the experience they were looking forward to.

Here at Sydney’s premier VR escape room, we recognize the importance of execution in creating awesome experiences for our players.

Our VR escape games have storylines that are bound to incite excitement and curiosity.

Our VR setup will create an experience like few others…

...and that’s not just bluster!

We are Sydney’s only VR escape room with real-time hand tracking that eliminates the need for you to hold controllers while taking part.

Our VR setup is multisensory, which means you will be able to feel heat and wind on your face, and even experience the smell of gunpowder lingering in the air.

We are on our toes throughout the game

A gamesmaster keeps an eye on your team, and your progress through the game, and will intervene in case of any problems.

Testing and cleaning our equipment

As some of the VR equipment (like the headset) comes into direct contact with your body, we clean it after every single session, to ensure a completely hygienic experience.

I doubt I need to tell you about this thing...

...that has been stinking our lives up pretty badly this year.

Which means that to be an experience must account for COVIDSafety, so the audience feels they are safe from being infected, allowing them to enjoy the experience.

Which is why we’ve taken it upon ourselves to come up with a COVIDSafety Policy, and become a registered COVIDSafe business.

Are some of the steps we have taken to make our VR escape game COVIDSafe, ensuring a worry-free experience for participants.

And that is how Entermission ensures an intensely enjoyable group experience for you and your friends, by focusing on a safe and snafu-free execution.